Sitting here in front of my computer I fell asleep, only to wake up a little later to the most beautiful piece of melodious music you can imagine. So my thoughts took a short trip down memory lane of all the “music” I loved before.

The hits of yesteryear

When I was at school during the 1960’s and 1970” the Top 20 hits of the week were always broadcasted, I think on a Friday night, and I used to listen in bed on a small transistor radio. Nowadays some people call them the best oldies of all time. Songs like Pretty Belinda and Carole OK by Chris Andrews, The Beatles’ Can’t Buy me Love and A Hard day’s night comes to mind.

Some bands had interesting names like The Tremeloes who sang Even the bad times are good.

Nowadays with all the corruption and Covid-19 it sometimes feel like “even the good times are bad.”

Another group with an interesting name was Dave Dee, Dozy, Beaky, Mick & Tich who sang Bend It! So were The Troggs (Wild Thing), The 1910 Fruitgum Company (Simon Says) and the well known Beach Boys (Barbara Ann).

Now that scientists predict that Covid-19 is probably here to stay, The Beatles’ song Yesterday seems very relevant for today. They sang “Yesterday all my troubles seemed so far away, now it looks as though they’re here to stay.”

When we were the “Young Ones”

Towards the end of my military service in 1973, The Rolling Stones’ song Angie was very popular and we called it our “Min Dae” song. During my years as a full time student, I attended numerous weekend and longer camps and the songs we sang there form part of my fondest student memories.

Then when I started working as a teacher I had a radio / cassette player combination built into my car and I had music with the press of a button. In 1978 it was a nice luxury to have.

But now, more than 40 years later, the whole music industry looks different and we have more options than we can handle. 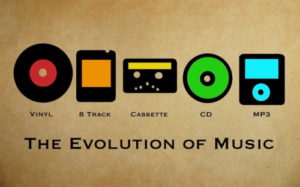 Over the years though different genres of music fascinated me. When I started working, for a long time, I only listened rock music. But then one day I realized that a different menu might perhaps do me good.

So I swopped the rock music for classical music, an extreme opposite. So for a couple of years I listened mainly to classical music. Over time though I realized that I am fonder of instrumental music than of opera. Then some more years later, Gospel music became my next favourite music genre.

Over the years we moved from records to cassettes and then to CD’s. At present though it seems like different types of online stores is the way forward, while on the other hand vinyl records are once again becoming popular. Shall we say we’ve come full circle?

Nowadays I listen to all the music genres mentioned before and it is really available at my fingertips; loaded on my computer. I can tune in on 14 different radio stations from my computer. So,

I believe we became spoiled for choice.

The bigger the choice though, the more difficult it becomes to choose what you want to listen to. So let us just agree with ABBA “Thank You for the Music.”

Do you feel like a square peg in a round hole in your job or business and you don’t know why? If that is you, a Career Direct Assessment (available online) will help you understand. It will not only show who you are, but will also point you in the right direction.

The first day of the rest of your life
Issues, causes and productive work