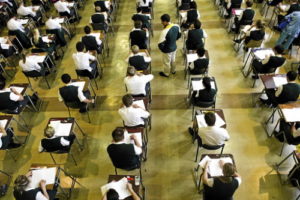 This week marked the end of the matric exams which brings different emotions to each one of us. When I wrote matric I was a very insecure 18 year old holding thumb that I would pass matric. One sure thing though was that on the 7th of January the next year my place was booked on the train to Bethlehem for military service. Until then I hardly knew there was a Bethlehem besides the one where Jesus was born.

Forward a couple of years and I was a teacher preparing matric pupils for their final exams. This again is a different kind of matric stress, because your future as a teacher is partly dependent on the matric results your pupils produce in their final exams. So, it is not only the learners that eagerly await the results which will determine their future, the same holds true for teachers.

Again forward some years and my own children, four of them, one after another reached their final year of school and you live with them through planning for the year after, their last interschool’s, getting a drivers licence, matric farewell, record exam and final exam. To me each one’s matric year gave rise to a certain level of stress as you guided them to achieve their best for their own benefit. And finally the wait till January to know whether the quality of the certificate will really open the doors they’ve hoped for.
To those of you whose children just finished matric, I trust that their results will open the right doors for them so they can follow their dreams. If your son or daughter will be in matric during 2020, I trust that it will be a good year to both of you.

When a child finishes school and leaves home it is important for them to take responsibility and for parents to let go. Although one’s children always remain close to your heart, they need to rise to the occasion, as hard as it may be.

All major transitions in life have an element of “what next?” attached to it. Each new phase of life contains an element of what people often refer to as a new season. The one thing that often complicates a transition in life is if it catches you off guard. All of a sudden you realise that something has changed and you are not sure how to handle it.

It is therefore important to be as well prepared as possible for the changes you can expect after a transition. If a matric son or daughter can be certain of which job or studies they want to pursue the next year, it just makes entering adulthood that much easier. Being uncertain at the end of matric can lead to a lot of stress and anxiety about what’s to come.
Similarly

when you get married, when you reach midlife, when you retire, all contain a “what next?” that can rock the boat

if you are not prepared for it. One should always have a positive vision of the future and something significant yet to do. Without understanding and planning for the next phase you may end up living aimlessly in the next phase of life.

If you are uncertain about “what next?” at any stage of life, I’d love to assist you making the next move. A Career Direct Assessment can also help to show who you really are and will point you in the right direction.

matric, midlife, planning, transition, what next