You are here: Home › Economic reality and a new normal
By David Malherbe (@DGMalherbe) on 2020-08-05 in Business, Character, Economy

According to Mike Schüssler of economists.co.za the economic figures for the month of June gives a much more realistic picture of the extent to which the Covid-19 pandemic has played havoc in the South African economy.

According to Schüssler it is much worse than anticipated.

He says according to the figures released by BankServAfrica, 20,7% fewer salaries were paid out in June 2020 in the formal sector of the economy compared to the year before. This means that one fifth of workers in large and medium sized organisations have lost their jobs by the end of June.

Who makes the rules?

What upsets me about these figures are that while government employees are basically not financially affected by the pandemic, they (members of parliament included) are the ones who have the right to make rules and regulations that put millions of people out of work and lose their livelihood.

It is not difficult to impose rules and regulations when you and your colleagues will not have to bear the brunt of it.

They should rather follow the “Golden Rule” as described in Luk 6:31 “And just as you want men to do to you, you also do to them likewise.”

But if so many people lose their jobs it also means that the companies they’ve worked for are all under severe pressure which in turn means that government will not be able to collect all the taxes they’ve planned for.

So how long will government still be able to pay all those salaries and grants? And on a personal level, what would a “new normal” look like? 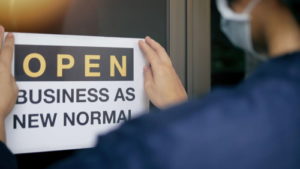 “’Normal’ is what happens every day: our daily routines, our habits, the many small facets of our intricate lives.

But we have already shifted into a new normal. Changes take about 30 days to become habits. We’ve had five months of changes enforced upon us.

A friend of mine spent about £4000 each year at his local coffee shop. For nearly seven years it’s been his second workspace.

That coffee shop closed during this pandemic. It re-opened two weeks ago. My friend went back there. Once. It was still empty. The magic was gone.

His daily routine changed while he stayed home.

It once included a few hours of breakfast while watching the passing parade. His new flow involves cooking breakfast and settling into his cosy office at home.

I know I will be much more careful with money in future. Before spending, I will turn over my credit card twice. I now know why my father always did this. My father did this after surviving the great depression and the Spanish flu.”

Our old normal won’t come back in our lifetimes.

The new normal will be online, no matter how this works out for each of us. It is scary. But it is also a time of opportunity.”

So let us be on the lookout for opportunities; not bad ones like Judas in Mat 26:16 “So from that time he sought opportunity to betray Him”, but good ones as we are encouraged to in Gal 6:10 “Therefore, as we have opportunity, let us do good to all.”

Do you feel like a square peg in a round hole in your job or business and you don’t know why? If that is you, a Career Direct Assessment (available online) will help you understand. It will not only show who you are, but will also point you in the right direction.