You are here: Home › Are you one of the lucky ones?
By David Malherbe (@DGMalherbe) on 2019-08-22 in Character, Excellence, Wise Living 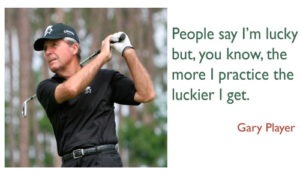 On our way back from Bonnievale where my wife and I enjoyed a weeklong breakaway, I saw a billboard near Robertson advertising Cloverfield wines and restaurant. Their logo caught my eye and made me turn back to take a photograph. It reads “Hope, Faith, Love, Luck – We have it all.” Sounds like a happy place be.

What are the chances?

But what are the chances that luck will lead to you becoming successful in life? I once read that it is estimated the chances are one in two million for a meteorite to hit the earth, while your chances to win the lotto is one in fourteen million. Does not seem like a reliable route to become successful in life.

Gary Player, South Africa’s world renowned golfer, in his day also known as the Black Knight because of his golfing attire, was often labelled as “very lucky.” Apparently another golfer once saw Gary practicing in a greenside bunker. After seeing Player hole out at his first attempt, the golfer offered him “50 bucks” to do it again. In went the next attempt. “$100 if you hold the next one” said the other golfer. In goes the third shot in a row. “Boy I have never seen anyone so lucky in my life.”

Yet Player’s take on his so called “great luck” was somewhat different.

The more I practice, the luckier I get.

The following of his favourite quotes stresses his belief in hard work and a positive attitude as the way to success;

You must work very hard to become a natural golfer

and “We create success or failure on the course primarily by our thoughts.”

This corresponds with Malcolm Gladwell’s finding in his book Outliers where he explains “the 10,000-hour rule.” 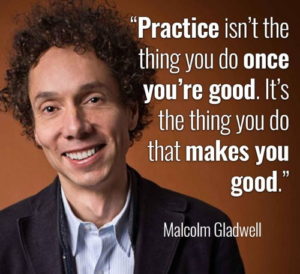 According to Gladwell, anyone who has practised something for 10,000 hours should be an expert or a master of that skill or trade. Studies conducted on musicians in top music schools to find musicians who are so-called “naturals” did not prove anything.

“Their research suggests that once a musician has enough ability to get into a top music school, the thing that distinguishes one performer from another is how hard he or she works. That’s it. And what’s more, the people at the very top don’t work just harder or even much harder than everyone else. They work much, much harder.” Gladwell estimates that to put in 10,000 hours of very hard work, will take approximately ten years.

Gladwell then concludes and says

It seems like Gary Player had it right long before Gladwell even thought of writing his book.

When I was a kid and we played marbles at school we challenged each other by shouting, “Try your luck, try your luck!” But what does the Bible say about trusting in “try your luck” as a source of provision?

We read in Isa 65:11-12 “But it will be different for you that forsake the Lord, who ignore Zion, my sacred hill, and worship Gad and Meni, the gods of luck and fate. It will be your fate to die a violent death, because you did not answer when I called you or listen when I spoke. You chose to disobey me and do evil.” (GNB)

Therefore it seems that God wants us to rather have faith and hope and to work hard than to “try your luck.”

Try your luck is also not the way to choose a career. A Career Direct Assessment will help you to make an informed decision. It will not only show who you are, but will also point you in the right direction.

The Camino and other walks of life
Pointless endeavour