It seems like we live in a time of great confusion, or perhaps we should say that some leaders have no clue about what is happening in the organisations they are leading.

Do they have any idea of the disruption they cause for the people they are supposed to serve? Since November certain insurance companies no longer insure SAL passengers against loss due to SAA flights being cancelled or even the company being liquidated.

I also see major travel agencies, no longer sell SAA tickets to their clients, because the risk is just too high. Travel agencies say that clients do not even ask to use SAA anymore. If this is the support the company gets from its major clients, I’m very glad that I’m not the person to head the business rescue for SAA.

But it is not only the passengers that suffer.

There are many other businesses dependent on an effective airline industry.

When scheduled flights leave or arrive late the businesses responsible for loading cargo and meals as well as transport companies transporting people to and from airports, all suffer because such irregular arrivals makes it hard to schedule your day.

It also cost them money because instead of taking the next customer to the airport you now unexpectedly have to wait an hour or two for the customer that arrives late. People on a plane who need to be at scheduled meetings, say in Cape Town, arrive hours late.

I think the financial and economic implications of the problems at SAA is perhaps much bigger than what we think. It is not only the SAA that suffers, it’s got a much bigger ripple effect affecting thousands of people and businesses. 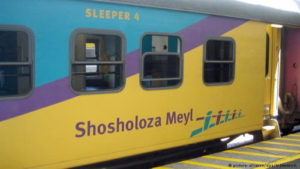 Unfortunately it seems like SAA is not the only entity whose passengers suffers due to poor service delivery. People dependant on public transport to get to work suffers from trains that are continually late. Family of ours need to daily pick up a caretaker that assists with one of their family members, at a station.

Every single day they need to send WhatsApp messages to and fro to enable them to be at the station when the lady arrives. I also read about a man from Namaqualand who came to pick up a family member in Cape Town who arrived with the Shosholoza Meyl … 9 hours late.

And I also read that load shedding cost the South African economy as much as R118bn during 2019. Another SOE failing to deliver.

Bearing in mind the afore-mentioned, just think how much better our economy can perform if each just delivered what they were supposed to deliver on time. Just think how many people lost their jobs due to others who did not deliver their dues and not on time.

I think we should all start to realise that whatever job we do, it affects many others if we do not do it well.

If your son or daughter struggles with the major decision about what to do after school (or even university) a Career Direct Assessment will help them clear the fog. It will not only show who they are, but will also point them in the right direction.