In his book The Tipping Point, Malcolm Gladwell writes that the best way to think about sudden big changes in the demand for certain products, goods or services or the sudden increase in the occurrence of a certain disease, or certain major events, is to think of them as epidemics.

According to Gladwell there are three characteristics to such epidemic events; firstly it is contagious, secondly it is often little changes that have big effects and thirdly the change happens not gradually, but at one dramatic moment. That is why modern change often happens the way that it does and

Gladwell calls that one dramatic moment a Tipping Point.

In January 2020 all of a sudden we heard that Harry and Meghan are moving to Canada for some peace and quiet. Hope they’ll find it, or perhaps they will realise they actually miss the limelight.

Perhaps Harry realised that his chances of rising to the throne became smaller as his brother’s family grew. As a child he was third in line after his father and older brother William. Now William’s three children moved Harry back to number six in line. Yes, perhaps, the visuals of the Queen’s Christmas message and other photographs, were just the last straw, the tipping point. 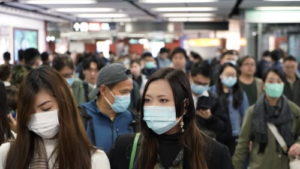 At present we see the occurrence of the Corona Virus which originated in the city of Wuhan in China and is now busy spreading globally. It’s got all the characteristics of an epidemic event; it is contagious, little changes have big effects and the changes happen incredibly fast.

In Wuhan, where 11 million people are under quarantine, streets are empty. The Chinese authorities have banned 56 million people in the wider region from travel. These measures have an enormous effect on the economy. Even in South Africa the value of the rand dropped significantly against all major currencies.

In China and some other countries, hundreds of people have already died and thousands are infected and there is no known cure or vaccine yet. At present it seems that this virus may perhaps be on the verge of a major tipping point situation.

Although the news is grim, it seems like it may even become grimmer. Some researchers predict that upwards of

Let’s hope that a vaccine may soon be found to curb the spread of this virus which at present threatens many lives as well as the world economy.

If your son or daughter struggles with the major decision about what to do after school (or even university) a Career Direct Assessment will help them clear the fog. It will not only show who they are, but will also point them in the right direction.

Do what you do do well
Valentine’s day