The Springbok’s secured their place in the final of the 2019 Rugby World Cup tournament and is now ranked number two in the world. On the other hand, the All Blacks after their loss to England, now have to settle for the third place, the lowest position they’ve held in more than 15 years.

Yet, when you are number one in the world, it is expected of you to win.

So if you do not win, you don’t finish second, you lose

and the longer you’ve been at the top the more the pressure because everyone tries to dethrone the world champion.

So the All Blacks did exceptionally well to win the Rugby World Cup two consecutive tournaments and they were well on their way for a third one until the past Saturday when the English Roses, stopped them in their tracks.

Now the English language offers different options to describe the All Blacks’ position after this tournament like; they were not able to successfully defend their title, they were pushed off their throne or even, they were brought back down to earth.

But let us not ignore the fact that for more than a decade they set the tone in world rugby and they keep the world record of playing 18 tests undefeated. But one big win or lose can change everything.

one major decision or event in life can make or break you, something that will stay with you.

Think of the Protea cricket team’s unfortunate run-out incident during the 1999 world cup tournament and after 20 years they are still labelled “chockers.” 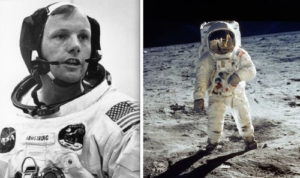 Some incidents make people famous like Neil Armstrong who became the first man to walk on the moon. Although twelve people in total set foot on the moon, the name everyone remembers is Armstrong’s, because he was first.

On the other hand when Oscar Pistorius was sentenced to imprisonment, his incredible career as “the blade runner” became so overshadowed by the turn of events that his previous achievements became almost forgotten.

Biblical figures suffered the same consequences. King David’s adulterous relationship with Bathsheba became the one incident that everybody always remembers in spite of all his incredible achievements. Or Moses who had a wonderful intimate relationship with God, faltered when he struck, instead of speak to, the rock and it resulted him to not enter the Promised Land.

Because we are all human and nobody’s perfect we are warned in 1Cor 10:11-12 “All these things happened to them as examples, and they were written for our admonition …

Therefore let him who thinks he stands take heed lest he fall.”

The career you follow is one of the most important make or break decisions you’ll ever make. A Career Direct Assessment will help you make a well informed decision. It will not only show who you are, but will also point you in the right direction.