Last week I wrote that nobody can remain at the top forever, that we are all human and that nobody’s perfect. So although we all love to be on the winning side, we also need to be able to handle defeat in a mature way and give credit when and where it is due.

The past weekend the Springbok supporters enjoyed the euphoria of winning the Rugby World Cup for the third time, while the much favoured England Roses and their supporters had to deal with a defeat they have not envisioned at all.

Although nobody wants to lose, I think the English team showed poor sportsmanship by almost rejecting their silver medals and their captain not even congratulating the winning team.

To call a spade a spade

But England’s media did not hold back on their graphic descriptions of their team’s demise. British newspapers described their woes as follow:

Winning is not everything/

Winning is not everything and losing is not the end of the world, but how you handle both victory and defeat, shows your character.

The Apostle Paul said “I have learned in whatever situation I am to be content. I know how to be brought low, and I know how to abound.” (Phi 4:11-12) ESV

# Taking business risks does not always pay off 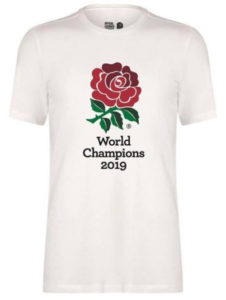 According to The Telegraph, Sports Direct, a British company specialising in sports apparel, printed a large number of T-Shirts with a Rose and the words “World Champions 2019” on it, prior to the match. It was marketed at £10 apiece.

During halftime they must have realised that the writing is on the wall, so they quickly placed an advert on social media, offering the T-shirts at £5 apiece. The ad read: “Sometimes it pays to celebrate early. Show your confidence in England by buying the T-shirt of the English winning team during halftime at half price.”

Some people on social media mocked that Sports Direct will now pay you £10 to take one off their hands. People suggested that it can be used for drying dishes or as workshop rags. The English should have known that

you should never count your chickens before they’re hatched.

According to Scripture it is not wise to make assumptions about the future. “Come now, you who say, today or tomorrow we will go into such and such a town and spend a year there and trade and make a profit” – yet you do not know what tomorrow will bring. What is your life? For you are a mist that appears for a little time and then vanishes.” (Jam 4:13-14) ESV

It is difficult to be content when you are in the wrong job. A Career Direct Assessment will help you make a well informed decision. It will not only show who you are, but will also point you in the right direction.

Make or break events
Back to earth